Is it hard for you to ask? 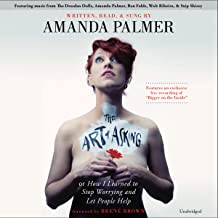 I’ve been listening to the audio version of “The Art of Asking” by Amanda Palmer. I’m really enjoying it and learning about our challenges with asking and, conversely, how powerful asking can be.

She has a chapter or two on her own and others’ Kickstarter campaigns and what made them a success, or a failure. Her takeaway is that asking in that context is successful when you’ve already built trust with your audience over a long period of time. She emphasizes that communicating with your audience is important, even when (maybe especially when) things are going off the rails and you need to apologize.

Just today, I participated in an ask based on some of these concepts.   I had a call from a 215 area code. I don’t get many of those even though I used to live in Philadelphia, so I answered. It was a student at the University of Pennsylvania (my alma mater) soliciting a donation. I hadn’t received a call from them in years so I did make a small donation- because they asked. The student wisely reminded me of the benefits of getting my PhD from Wharton and how important that’s been to me. My long-term trust with Penn and Wharton combined with asking, got the student a yes on their ask.

Asking is often hard for me. I like to think of myself as very independent and capable with no need to ask. The reality is that we all need to ask on occasion and when you have your own business, you’re asking for the sale often. It’s a skill that can be learned and perfected and as Amanda Palmer highlights, it’s important to built trust first before you make the ask.

What are you asking for these days?

p.s. I have a related (short) video up on my MarketingU YouTube Channel if you want to take a quick watch!