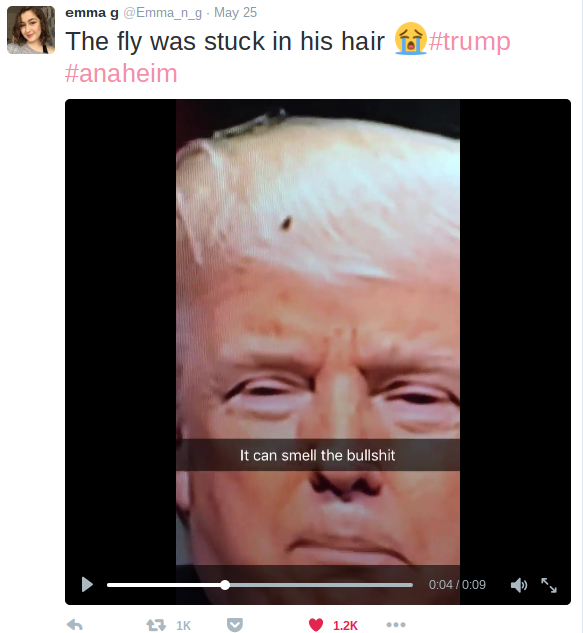 This is my daughter’s tweet.  We got a great lesson in how things go viral when she tweeted it out on May 25th.   As of today it’s been retweeted 1031 times and has 1169 likes.

She was watching a news show with the live rally playing and noticed the fly in Trump’s hair.  She rewound (is that what you call it on a DVR?) to get the part she wanted and recorded it with her phone and added the caption. Within a few minutes, she had tweeted it out.  With two hashtags: #trump and #anaheim.

#anaheim was trending at the time she tweeted it and so it got some attention from that. It was retweeted by a few folks/celebrities with very large followings quite quickly – I’m guessing it was her pithy comment that helped drive those early retweets and then it had a life of its own for a while.  I was actually driving her to an appointment and her phone kept buzzing with notifications.

By the next day, not only had it been retweeted directly from Twitter but it also had been written up in articles on Yahoo, Mic.com and was in a short piece on CNN.

A few things we noticed.  The hashtags seemed to really drive the virality. She happened to catch a trending tag at the right time.  She didn’t gain many followers from the runaway tweet though.  It’s easy to retweet or like, but requires a lot more work to follow someone (plus her feed is likely pretty typical for a college student).

My key takeaway- if you’ve got something (tweet, blog, other social media post) that is a match to a trending topic, make sure you use the hashtag (or keywords in a blog) to bring that extra traffic.